Players venture to a strange place inside cartoon labyrinths where the only weapon is their head - literally. Using their foursquare noggin, players can send foes tumbling or even break the very ground beneath them. Players must also be wary of the labyrinth's deadly hazards, obstacles, and enemies. 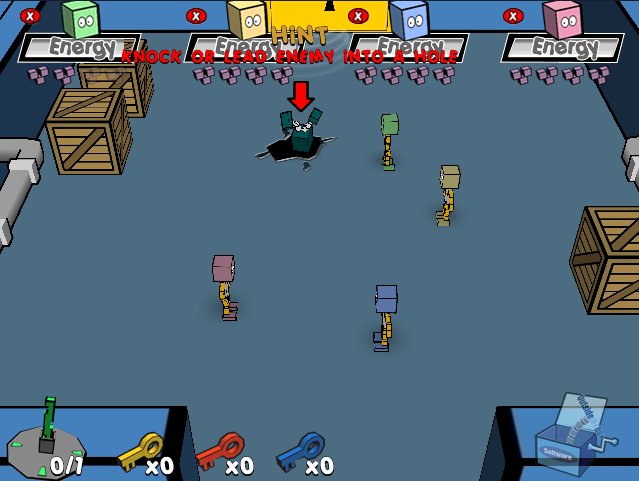 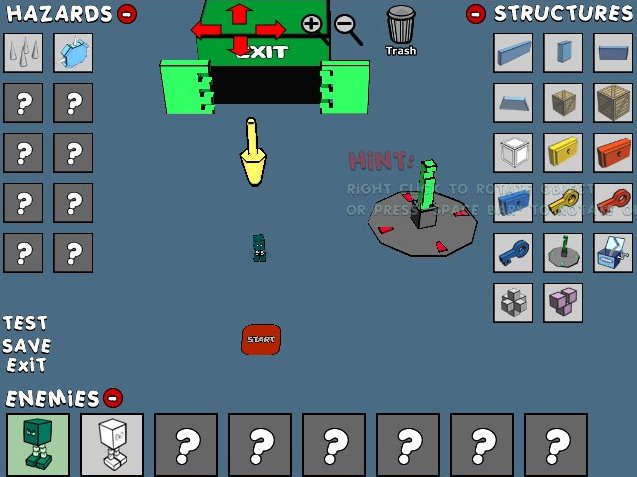 In 2006, I became really intrigued with the cel-shaded graphical style. I was always a fan of the style but in 2006 I also became interested in it from a development standpoint. Earlier in the year, the unreleased CityScape Battle was the first game where I experimented with cel-shaded graphics. At the same time I was experimenting with various other character designs utilizing the cel-shaded style. CityScape Battle was starting to become an ambitious title, so I wanted to do a shorter game in the interim so I could at least get something released in the 2006 calendar year. When I looked over the character designs I created, I just loved the BlockHead characters I created and I choose those characters to create a game around.

With all the previous game releases, I had worked with other artists to create characters or to do the 3D modeling. BlockHeads was the first game where I created every single aspect of the game myself. For better or for worse, I did the character designs, 3D modeling, 3D animations, UI, level design, environment modeling, and everything else. This allowed me to develop the game quickly and with a relatively small budget.

BlockHeads Clash took about 4 months to develop from start to finish. I really wanted it to have a arcade dungeon crawler feel. I spent quite a bit of time creating 2-4 player co-op mode where players could jump in at any moment, similar to the old arcade game Gauntlet. Not only was there a 4 player co-op mode but there was a battle mode where all 4 players could battle as well. I wanted something that was more than just a solo experience.

After the first 1.0 release, I added a Level Editor. As the player progressed through the main game, new items would be unlocked in the Level Editor. Players could then save and share the levels they created. I felt the game needed something more to improve replayability and to foster community activity so that is what the Level Editor was intended to address.

While cel-shaded graphics had been around for about 5-6 years on video game consoles at that point, BlockHeads Clash was one of the first desktop games on the PC/Mac to utilize the graphical style. Also the game mechanic of breaking the floor to trap/kill enemies was unique for this genre.

It's common for dungeon crawlers to have fairly repetitive environments. But the environments in BlockHeads Clash really did lack variety. This was due to me doing all the art and the overall time & budget constraints. Regardless, the colored corridors did begin to wear thin after awhile. There was also plans for boss battles but again there simply wasn't time to implement them.

BlockHeads Clash featured only two music tracks. The title screen / main screens and then the gameplay. All the gameplay.... the entire game only had one repeating music track. Indie desktop games at the time were often known for skimping out on music and unfortunately BlockHeads Clash lived up to that stereo-type. Which is unfortunate because Pow Pow's Great Adventure (the very first OTBS game release) actually had close to a dozen tracks of original music. Again, the lack of original music and musical variation in BlockHeads Clash was due to budget constraints but I think it was a pretty big step backwards compared to our previous OTBS game releases. Fortunately, ever since this game a greater effort has been put toward the music in subsequent game releases.

Including 4 player co-op in the main adventure and a separate 4 player battle mode was an admirable attempt to make BlockHeads Clash a social experience and to add value to the game overall. Unfortunately the concept was a bit flawed to begin with because it's extremely rare for 4 people to squish together on a computer keyboard to play a multiplayer game. Even in 2006 this wasn't very practical. Two players sharing the same keyboard is probably the limit for practical gameplay with local co-op on a desktop computer. In hindsight, it might have been better to just create a 2 player co-op and/or just focus on creating boss battles.

BlockHeads Clash had modest sales at best. It sold more than our previous desktop games but not by much. It was getting harder and harder to self publish desktop games outside the major distribution channels. At the time the big distribution channels were casual game portals like Big Fish Games, Real Arcade, PlayFirst, Yahoo, and similar portals. Steam hadn't really taken off yet as a distribution game service for indie games. Steam wouldn't fully open their doors to indie games until 2012, 6 years after BlockHeads Clash release. Being a dungeon crawler, BlockHeads Clash didn't really fit with the casual portals so we had to use outside smaller channels to get the game out. In the late 90s and early 2000s it was possible for indie developers to make a nice little profit utilizing those small channels but those days were over. Ultimately it was our last desktop game.

Even though BlockHeads Clash was never a big seller for us, it spawned our new unofficial mascot characters. I still adore the characters and there have been numerous unreleased Blockhead games / demos over the years. In the mobile game Uninvited Guests, a BlockHeads mini-game also makes a cameo. So without a doubt a new full-featured BlockHeads game will resurface again when the time is right.